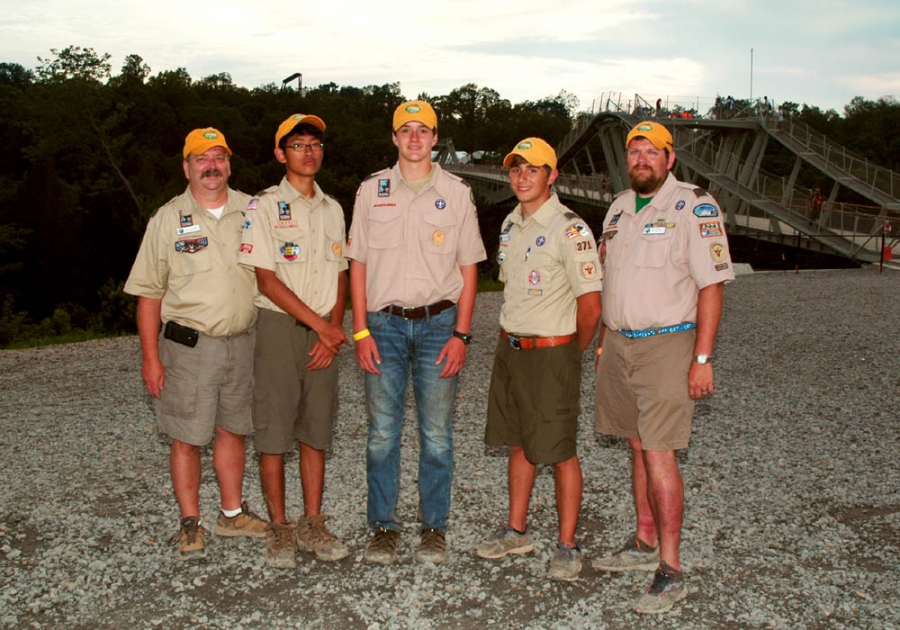 Three scouts and two adults from Troop 371 attended the 2013 National Scout Jamboree in West Virginia. The National Scout Jamboree is an event that is celebrated approximately every four years. From 1981 through 2010, the Jamboree was held in Fort A.P. Hill, Virginia, just outside of Washington, DC. The 2013 event was held for the first time on property owned by the Boy Scouts of America, now its new home, the Summit Bechtel Reserve (SBR), is a huge playground, adjacent to the New River Gorge National Recreation Area, filled with thousands of acres for exploration by its visitors.

With departure from Columbus, Georgia, on Sunday, July 13, destined for an overnight stay at Virginia Tech, the council contingent loaded up on a charter bus and made their way north. A total of thirty-six scouts and 4 adult leaders were excited to see a Jamboree up close and full of activity. Monday’s arrival at the Summit greeted us with the tasks of setting up our camp and get bearings at this enormous venue.

While there were a few “pre-programmed” activities for the scouts to enjoy, much of the time at SBR was available for them to use it as they pleased. Top of the line facilities for shooting sports, climbing walls and towers, mountain biking, and a skate park were just a few of the options. Others, including the adults, caught the patch trading bug and spent much of their time making friends through trading patches.

Breakfast and supper each day were prepared by one of the patrols in our campsite. Lunch each day was pre-packed at camp each morning and the participants carried with them until they were ready to eat. Nourishment was needed each day as many walked anywhere from 8 to 10 miles going to and participating in all the activities. Some who kept up with their mileage each day reached upwards of 60 miles for the duration of Jambo.

Several scouts, including our own Ted, were able to ride the “Big Zip”, which is a zip line spanning a distance of over three-quarters of a mile long. SCUBA was also a popular activity for our guys. Two of our troop’s scouts and Mr. Middleton were able to do some whitewater rafting down the nearby New River.

While we were at Jamboree, we had the opportunity to give back to the nearby communities in West Virginia. Our troop helped clean a trail in the neighboring town of Beckley. We were there for a total of nine days and by the time the end came, we were all ready to go home. Mainly from being so tired and worn out, so we were looking forward to the bus ride home, sure to be nothing but sleeping scouts and adults. Before we could depart, we had to break camp and this particular morning a serious thunderstorm awoke us from our slumber. Rain had been a staple event during the second half of our time at SBR so we had grown weary of it as well.

During our drive home, we all had the opportunity to evaluate our week and look back on the things we enjoyed, things we didn’t and what we would do given another opportunity. That opportunity comes in the summer of 2017 when the National Scout Jamboree returns to the hills in West Virginia.