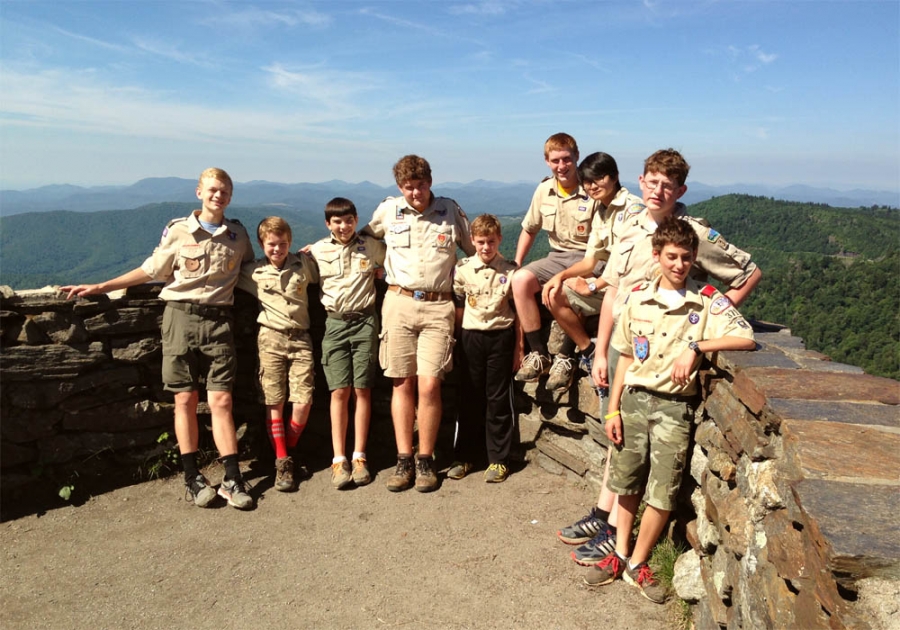 On Saturday, June 28th, nine scouts and two leaders departed Lakeview’s parking lot destined for Camp Daniel Boone outside of Waynesville, North Carolina. This was Troop 371’s second time to attend camp at Boone in three summers, with 2012 being the first trip. However, this was the first time for everyone, leaders included.

En route we stopped for lunch at an Atlanta-area icon, The Varsity. After filling up on chili dogs, onion rings and a Frosted Orange, we continued to weave our way through the north Georgia and western North Carolina mountains to find a damp and overcast afternoon awaiting us. We arrived at camp just before dinner and were able to settle into our campsite. Our site, Apache, was a mixture of 4-man cabins and two-man wall tents. Considering we were the only unit in our site, everyone was able to choose either using a tent or a cabin. After dinner, we headed into town to visit the local Wal-Mart for some last minute items.

Sunday morning was filled with anticipation as camp would officially “start” after lunch. But before then, Mr. Middleton carried the scouts to a local swimming hole called “Sliding Rock” for a morning refresher. The temperature of the water, around the mid-60s, was quite brisk for those scouts who choose to slide and most of them did so. After our “swim”, during the drive back to camp, we made a stop along the Blue Ridge Parkway, in order to have our Sunday morning devotion. Once back at camp, we made final preparations for the start of camp. The afternoon was filled with check-in, group photos, a tour of camp along with dinner and the opening campfire, introducing us officially to the camp staff and all the fun that awaited our week.

Having come from the Central time zone, the Monday morning wake-up call at 6am Eastern Time was brutal. But the thought of getting into a daily routine for the next five days was enough to push us through that wall. All the Scouts headed to merit badge classes after breakfast. While the scouts were in merit badge classes, Mr. Scoggins and Mr. Middleton were able to visit several of the program areas to check on our scouts and sit in for a few minutes of the instruction time. Mr. Scoggins also found time to take a training class to attend each morning that he needed. Classes resumed each day after lunch and we all met back up at camp each evening to prepare for dinner.

Several scouts chose to go off camp property to take two merit badges class at a local farm. Monday and Wednesday nights was the Horsemanship merit badge and Tuesday and Thursday was for Animal Science. Not only were these two classes interesting and full of information but entertaining and hands on. The scouts who took these classes thoroughly enjoyed themselves (along with the adults there to observe). Those scouts and leaders who chose to stay at camp each night were busy with nighttime activities and extra time to spend in program areas to continue working on merit badges outside of class time. Adult leader competitions like rifle shooting and shotgun shooting were also during this time. Our own Mr. Scoggins won the adult shotgun shoot competition.

Thursday and Friday were bustling with activity as scouts were hurriedly trying to finish up work on their merit badges: Space Exploration launched their rockets; Mile Swim candidates swam a full mile; E Prep and Search & Rescue each had their drills. Before leaving camp, the troop was able to give back to the camp property in the way of restoring a roadside walkway that crossed an active stream. The walkway had been eroding over the last couple of years and the troop was able to bring it back into use. Friday morning also greeted us with chilly temperatures; it was a brisk 45 or so degrees before breakfast. It warmed up as the day went along, but it made for wonderful camp sleeping weather.

We departed camp and returned to home on the morning of Saturday, July 5th. Before leaving the state of North Carolina, we traveled part of the Blue Ridge Parkway, making several stops. One of the stops we made at Devil’s Courthouse and, of course, the scouts wanted to hike to the top of it. Great views from the top could see nearly 5 states, had the skies been clear. We had a great week at CDB and look forward to a return trip, likely in the summer of 2016.

View the embedded image gallery online at:
http://www.bsa371.org/index.php/about-troop-371/history/item/54-camp-daniel-boone-2014#sigProId8d0e51d89f
back to top